How To Host An Adult Halloween Party

Throwing an adult Halloween party is my new favorite thing, y’all! I had so much fun at my recent dinner party that I might be making this a tradition. All you need is good food, silly costumes, and an awesome venue. Throw in some amazing friends and you have yourself a paaaartay! I was lucky enough to have the party in the Sky Lounge at Alexan West Dallas. It made for an incredible view and an awesome room that matched perfectly with my theme. I partnered with DinDin Party to make my event extra special. Everyone loved their contribution to the party (I’ll get more into that later). For now, here’s how I threw it all together in less than 2 weeks!

You read that right. I made my costume for only $7. I was the Bride of Frankenstein because I knew it would be an easy one to put together. Since I already have big hair, all I had to buy was some silver spray paint and a white dress. 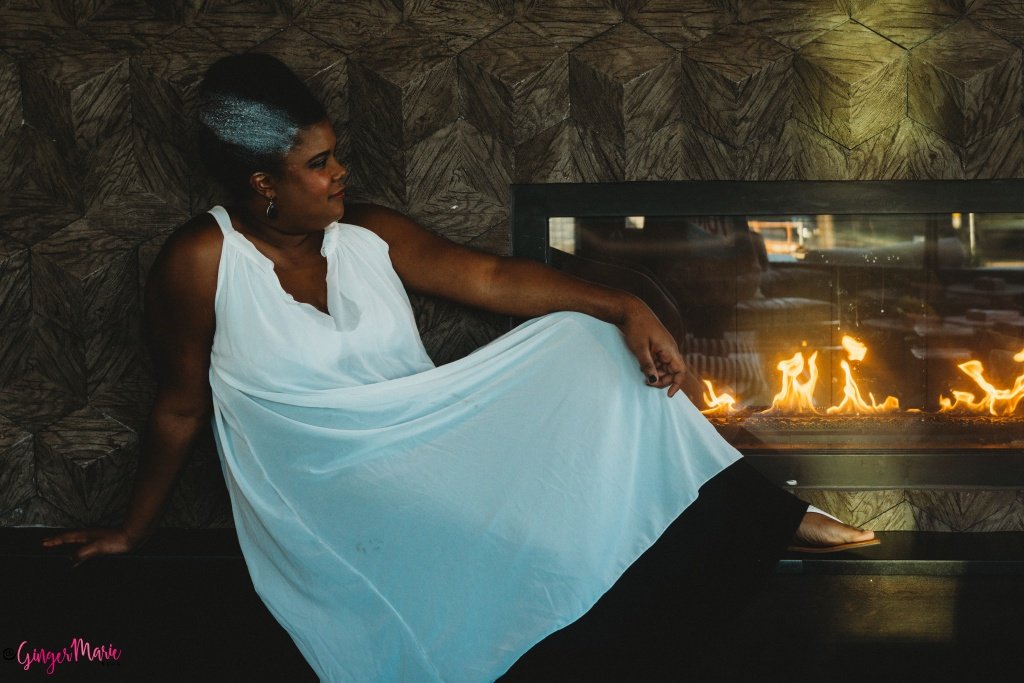 I thrifted the dress from my local Salvation Army and cut it so it would fit me. I’m pretty sure the dress was a medium or large, so I just cut slits in the arm, and gave myself cleavage. I spray painted my hair on the sides, and pinned it up high. Then I did my makeup to match my hair, and threw on some vintage-feeling earrings. 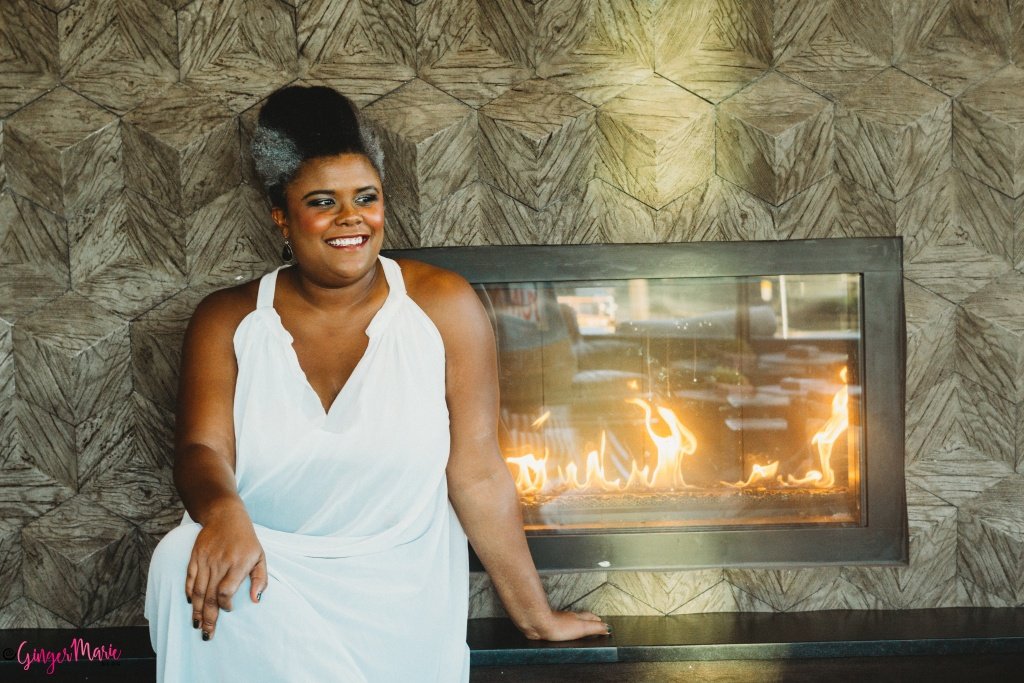 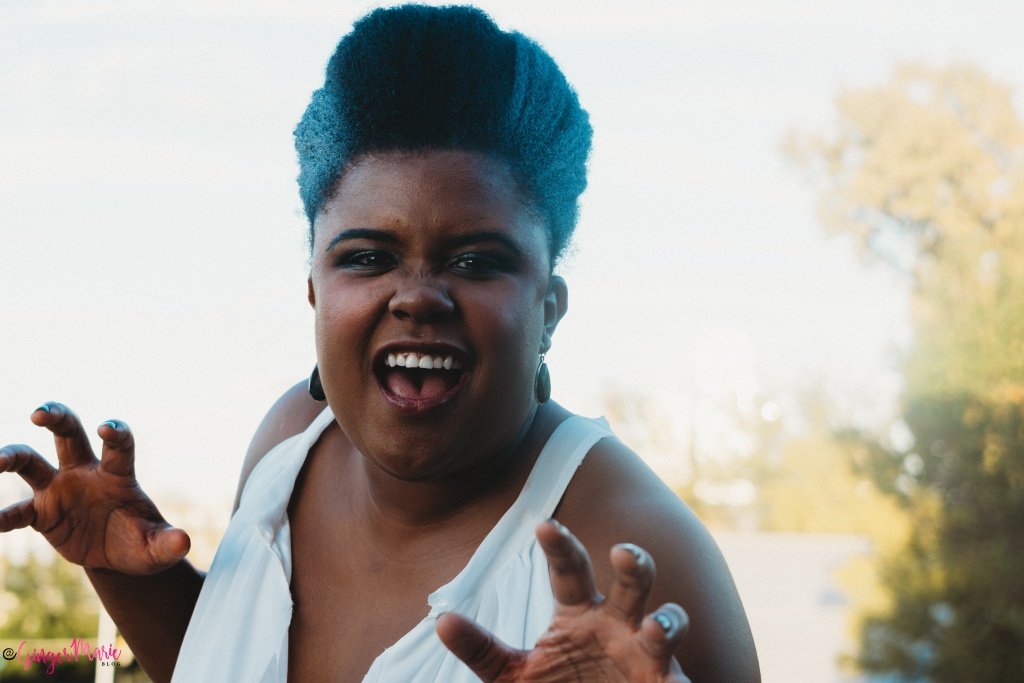 I was happy to see that everyone who attended got into character too! We had a hot dog, sriracha, the couple from Grease, a goddess, a cat, and pb&j! 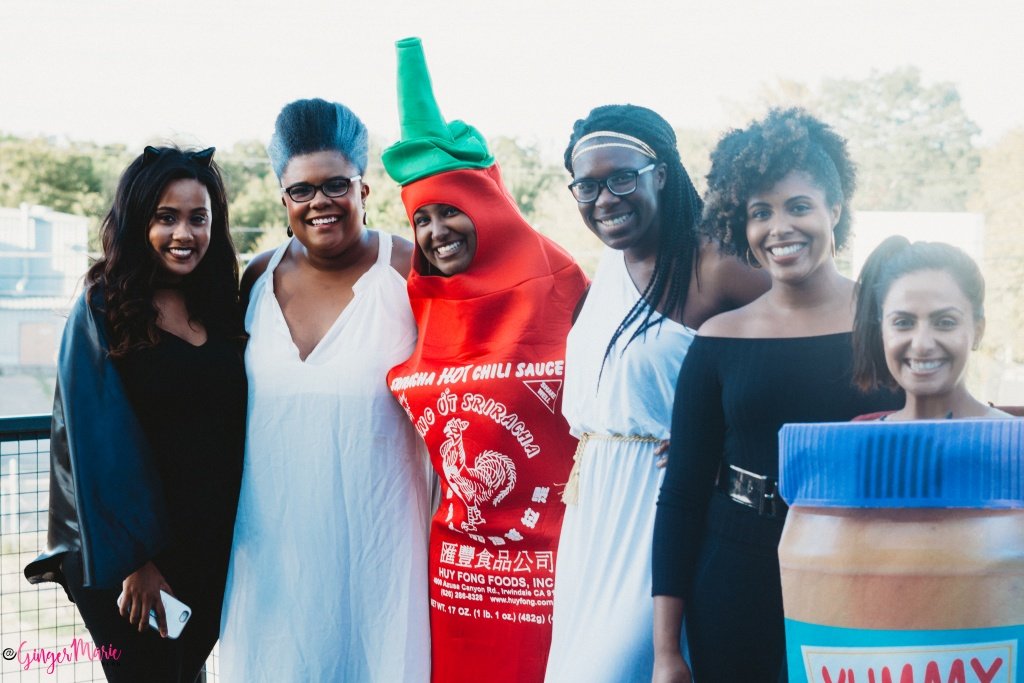 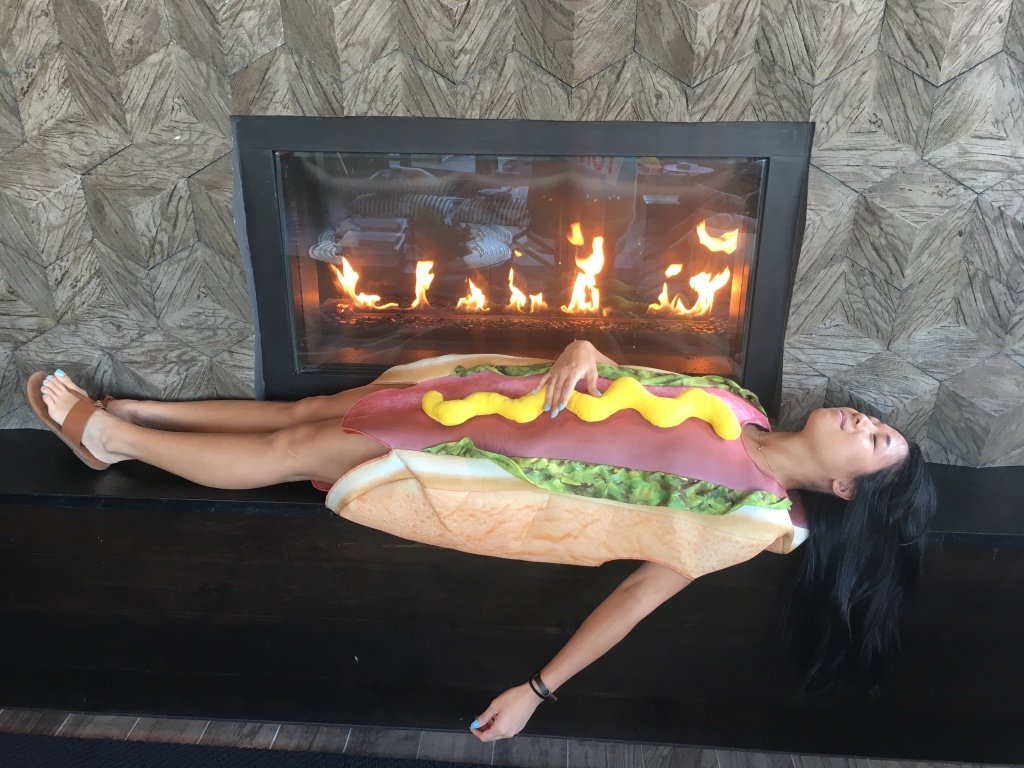 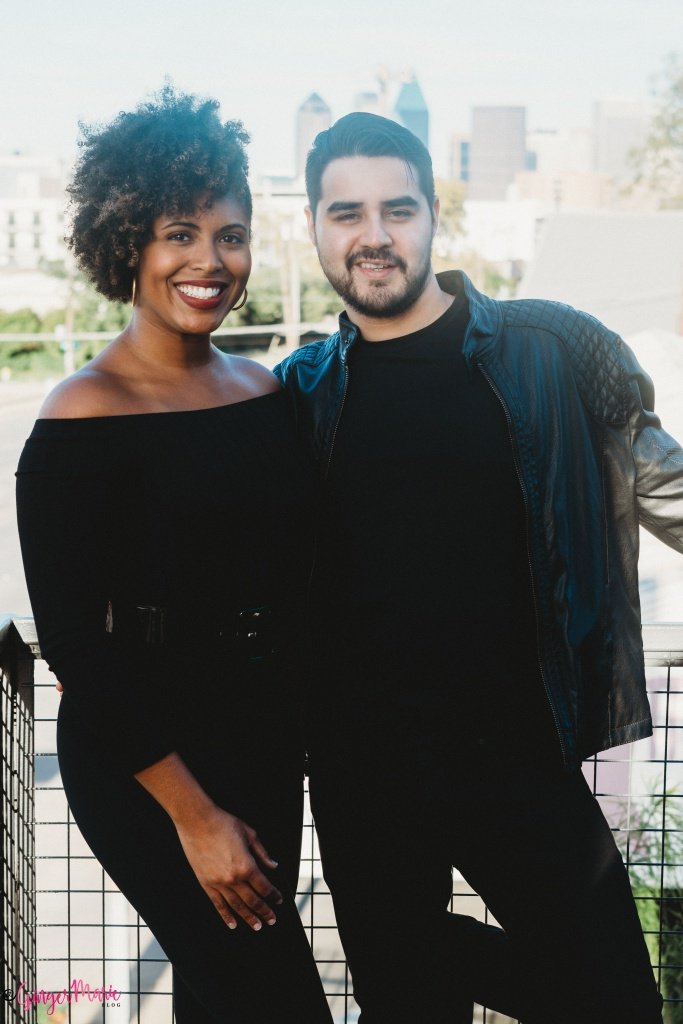 Pinterest was my best friend when it came to coming up with recipes for my party. I knew I wanted some super tacky dishes and that it would give me some GREAT ideas. It didn’t disappoint. 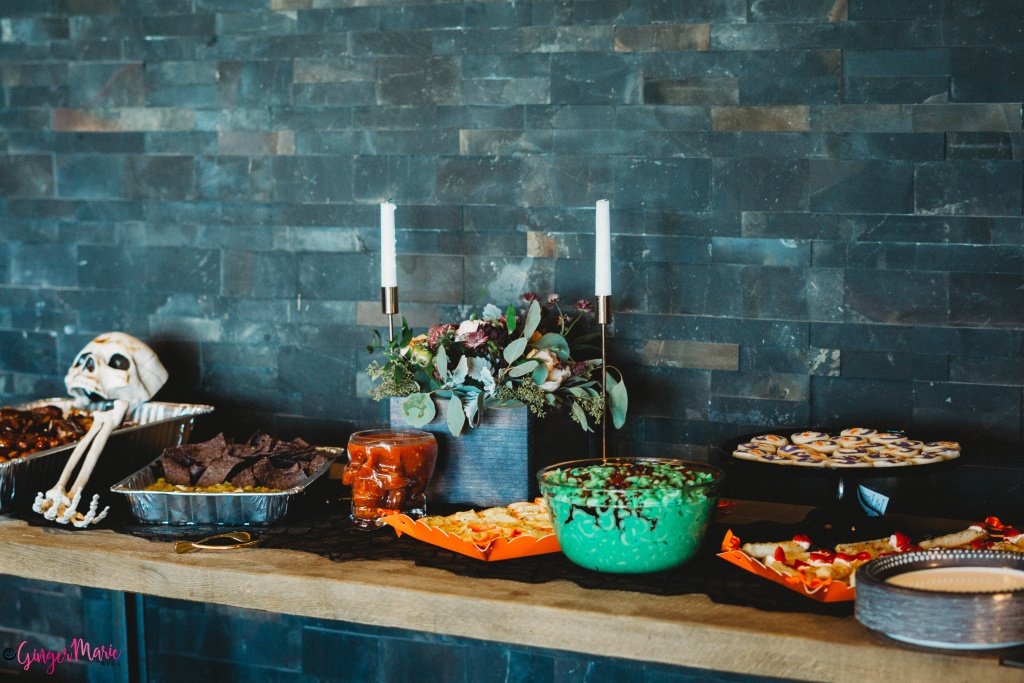 I got the idea for this one from Peggy Under Pressure . It was definitely a favorite among my guests. It looked DISGUSTING and it tasted wonderful. To make it, I just cooked up some ribs (8 minutes on each side on the grill, then 3 hours in an oven on 325 degrees). I lined those at the top, then put some barbecue sausages at the bottom for his guts. Stick in a skull head and arms and you have yourself a creepy dead man! 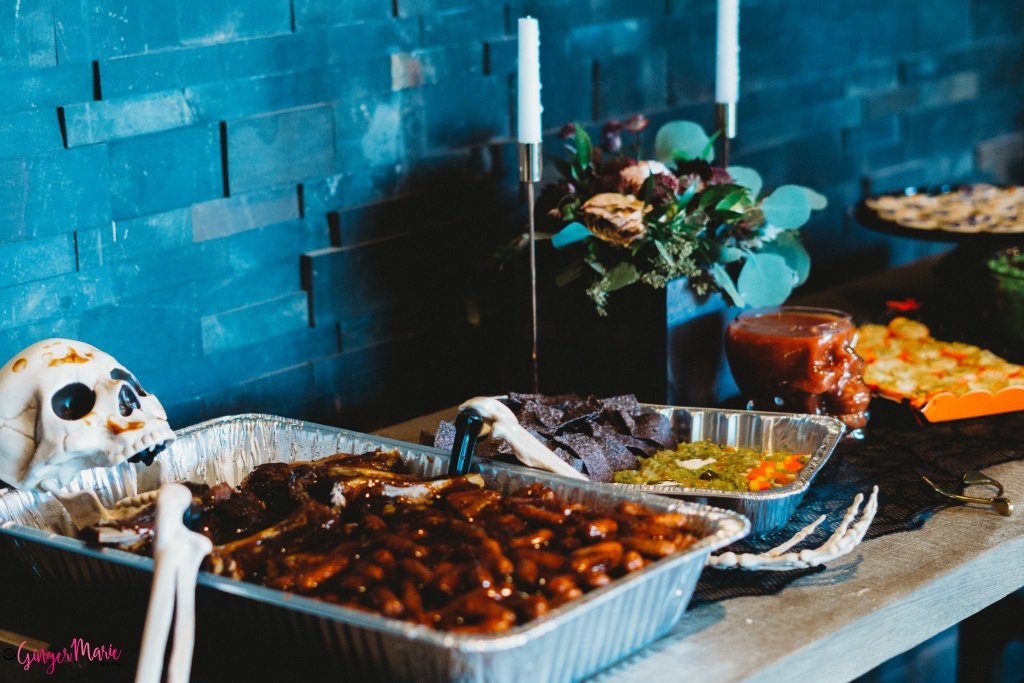 This was probably the easiest one to make. I bought some pre-made guacamole from the store, and some blue chips. I spread out the guac on one end then put the chips up top. For his eyes I used sour cream and jalapeños. For the mouth, candy corn. 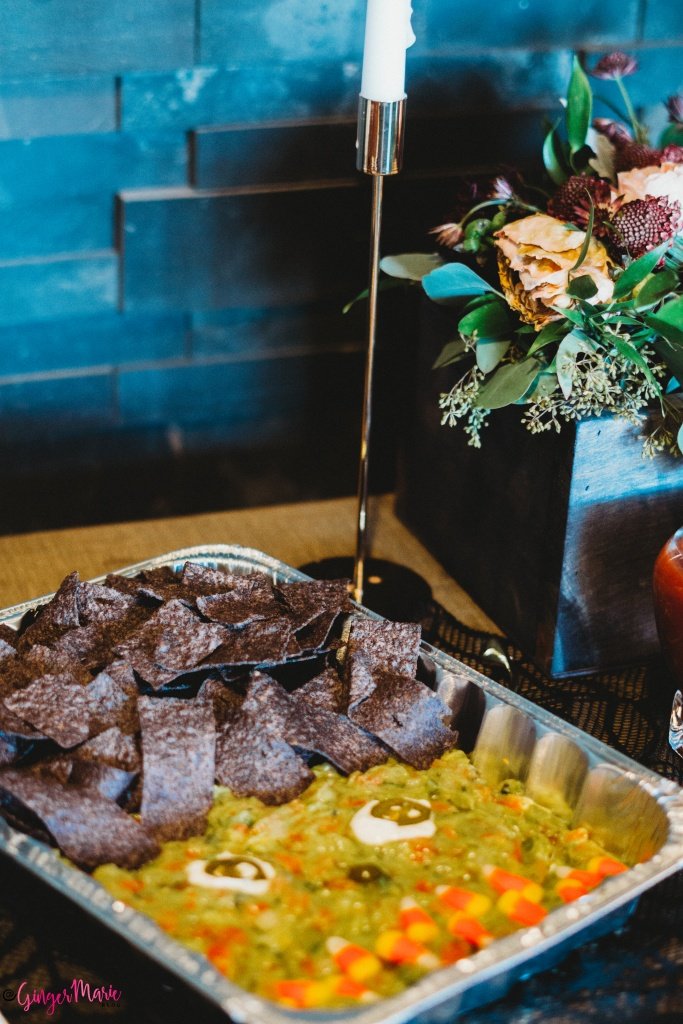 For the deviled eggs, I boiled them and cracked them (without peeling off the shell). Then I dipped them in food coloring to create a spider web look around them. Cut them in half and scoop out the yolk and put it in a bowl. Add mayo, relish, mustard, bacon, salt, pepper, and smoked paprika and mix it together. Then pipe the mixture into the eggs and top with a little more paprika. 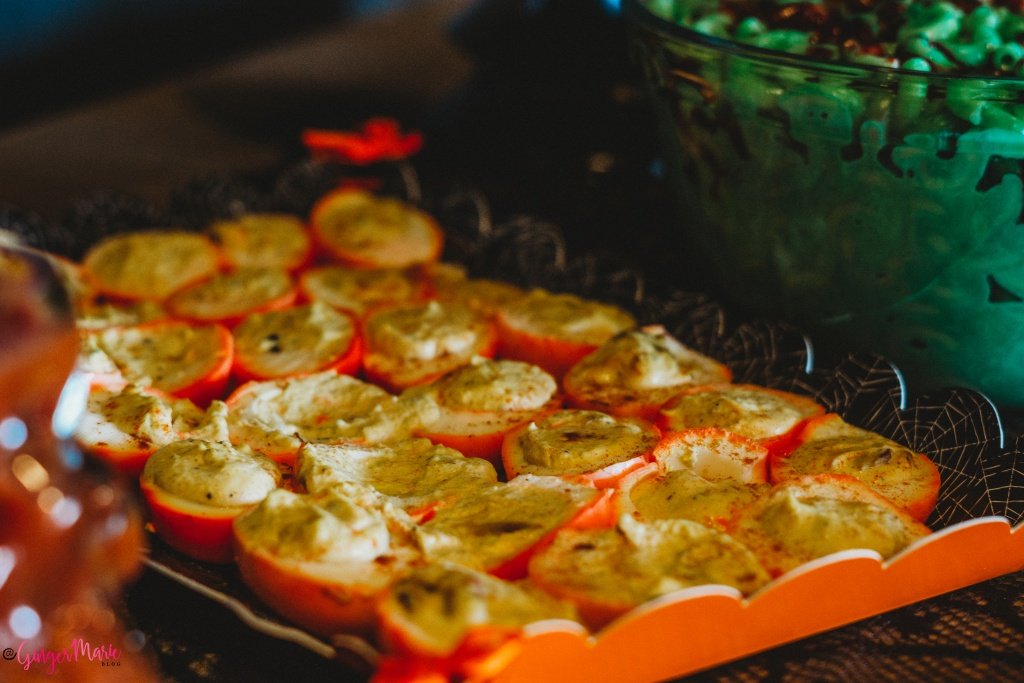 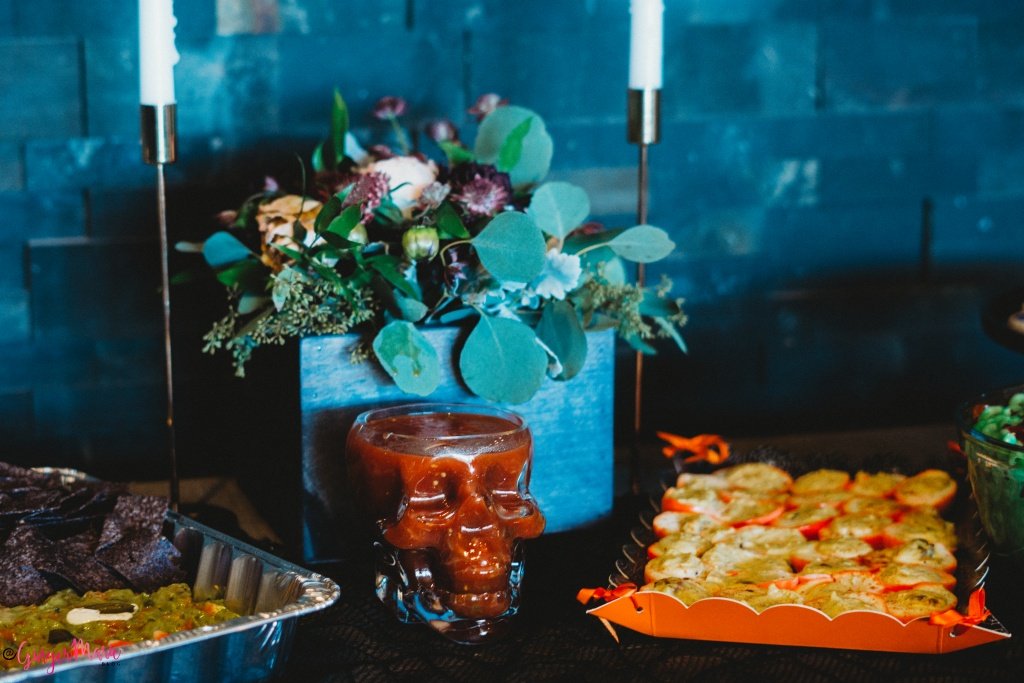 You may remember my Bacon Mac & Cheese cups from a while back. The recipe for the mac and cheese is the same (minus the bacon cups). The only difference is, I added green food coloring to the sauce before tossing it with the pasta. Then, after it was in it’s bowl, I added a few drops of red food coloring on top to make it look bloody. It was perfect because the blood was dripping through the gaps which really made it even creepier than I’d planned. 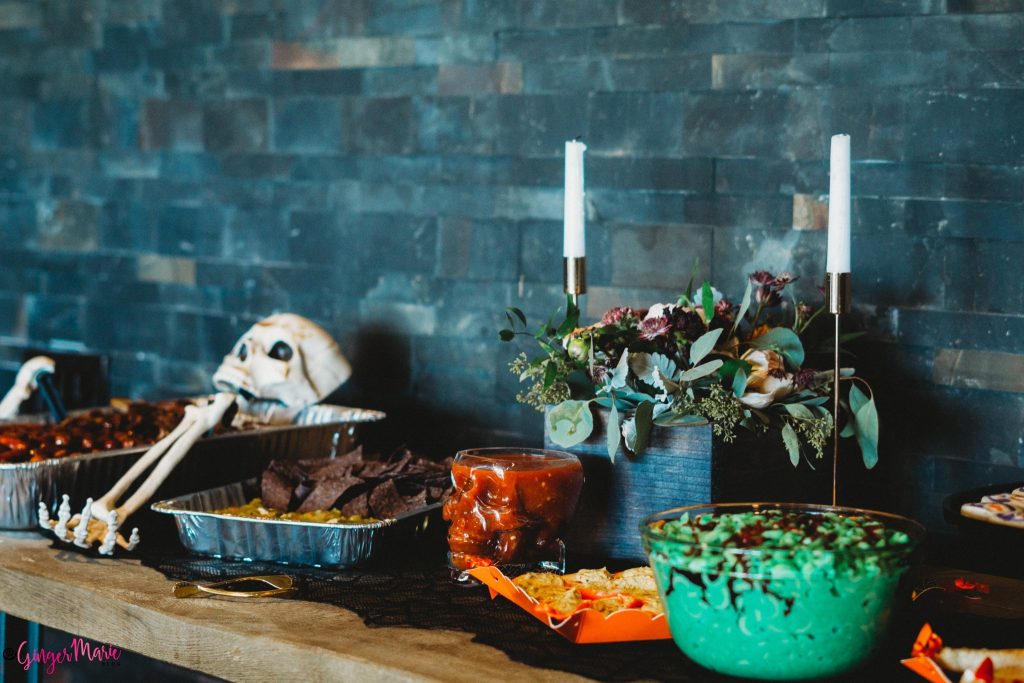 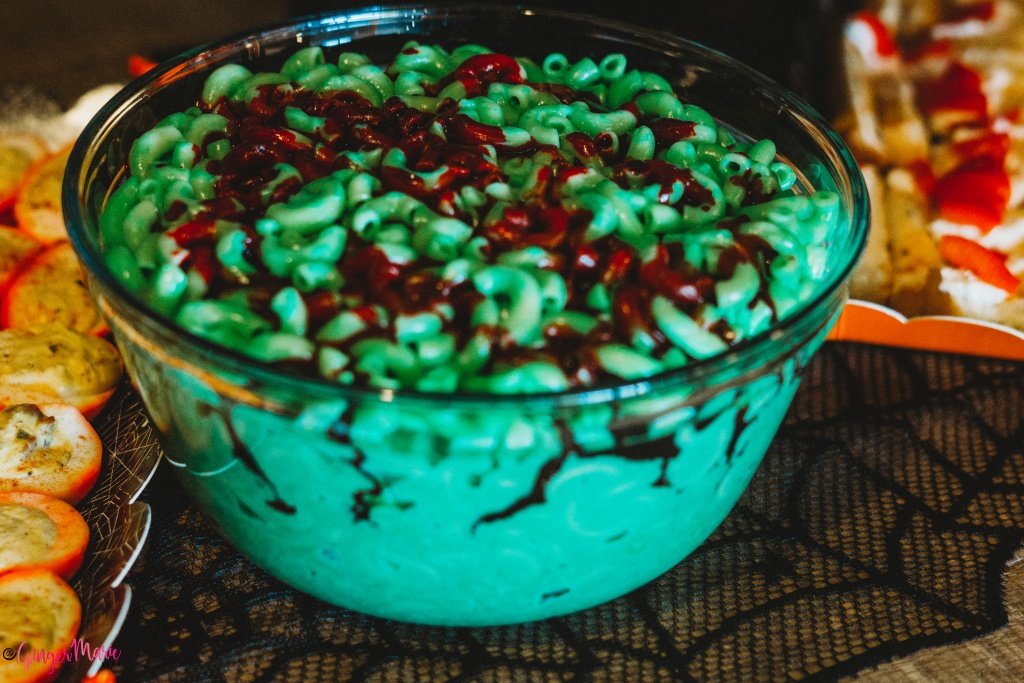 This one was super easy to make as well. I just bought some frozen Texas Toast and cooked it. Then I cut some red bell peppers into triangles and used them as fingernails. I used french onion dip to bind the two together. 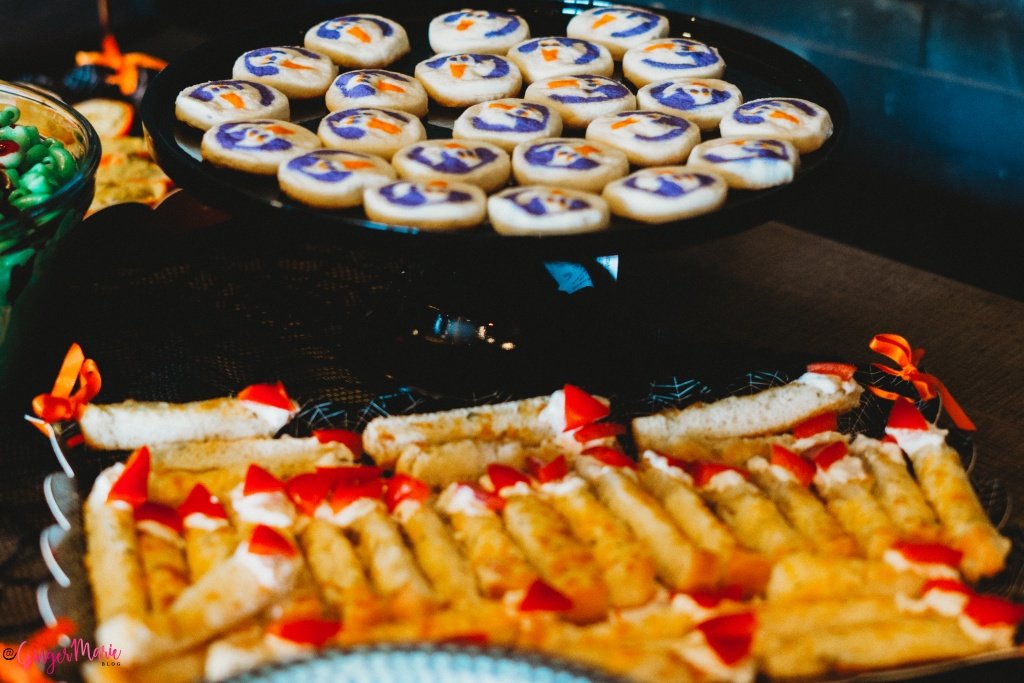 For these, you just make jello the way it was intended. Except, you only use half the water, and add tequila for the other half! Do that with both colors separately. After filling up half of the shots, you want to refrigerate it until firm, then add the other color on top. Spray some cool whip on top and finish it with a candy corn. 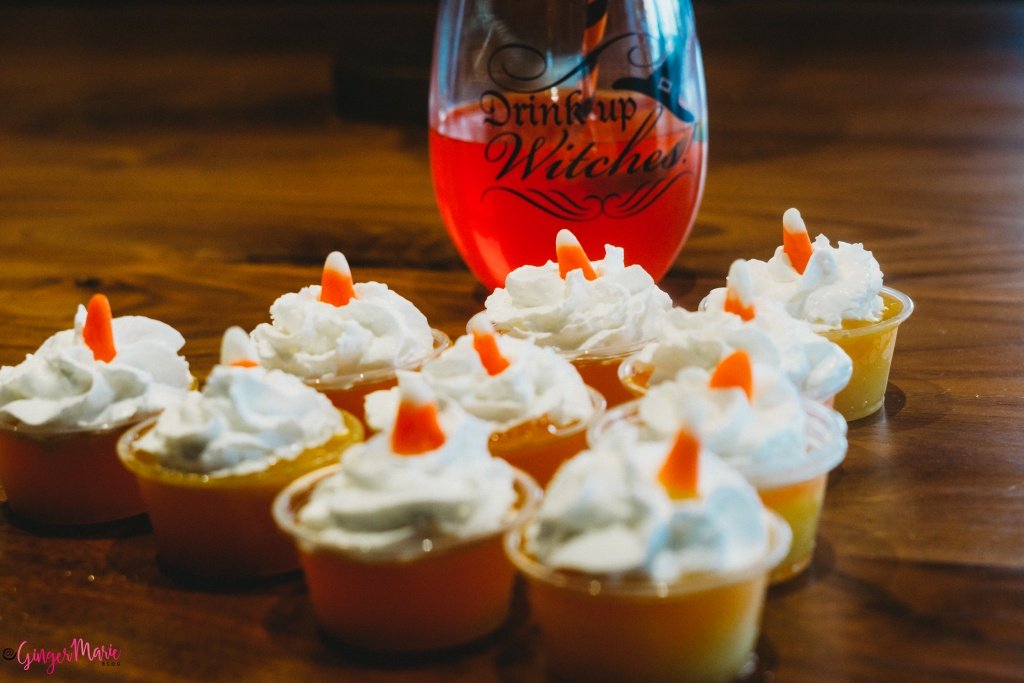 I was so busy getting all of my food ready, that I forgot to get stuff for margaritas! So instead, I improvised. I made this drink with tequila (as much as you prefer, Minute Maid Fruit Punch, Minute Made Lemonade, and Sprite. I also threw in some limes to add a little tang. It turned out great! 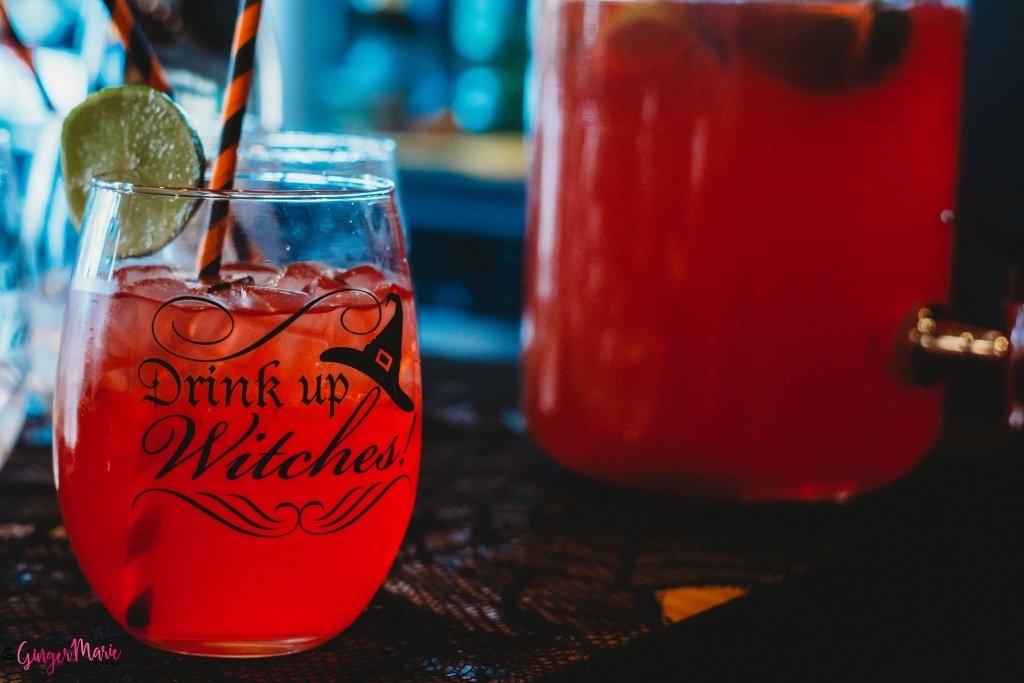 I tried to keep the decorations for this adult halloween party pretty simple. It just so happened that a few nights before my party, I received this beautiful, dark bouquet of flowers. I also got these super cute candle holders that I knew would be perfect for my party. After that, I bought everything from Michaels. I got a skull head to pour salsa into, a closed jar for the Tequila drink, and some plates and stuff for everyone to eat on. I also bought everyone a Halloween wine glass to drink out of and take home. That was it! Super simple and it all came together great. 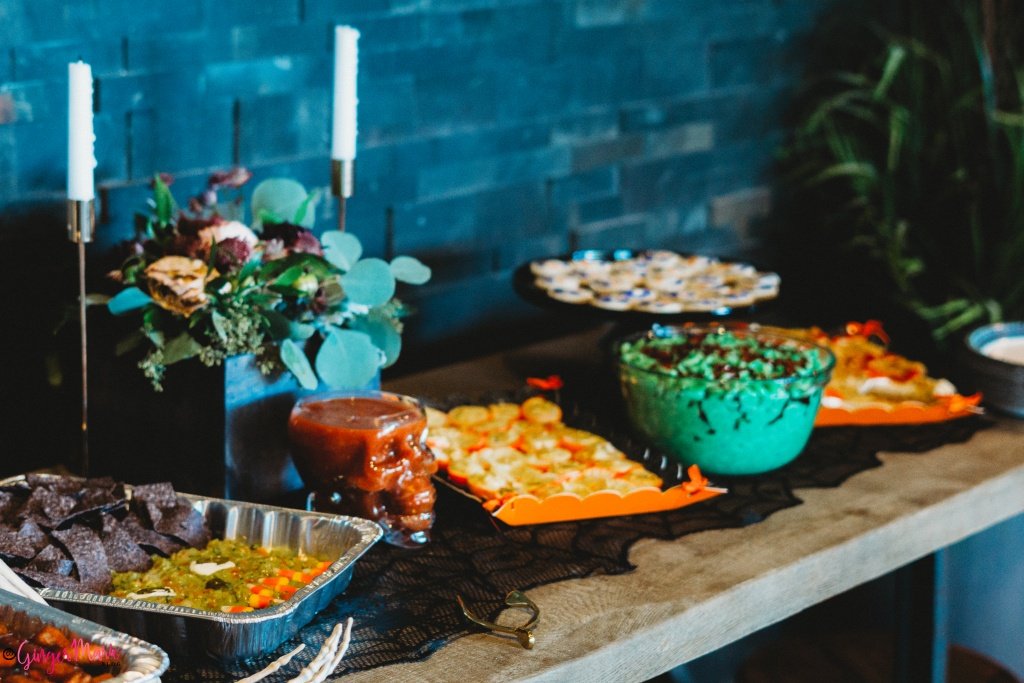 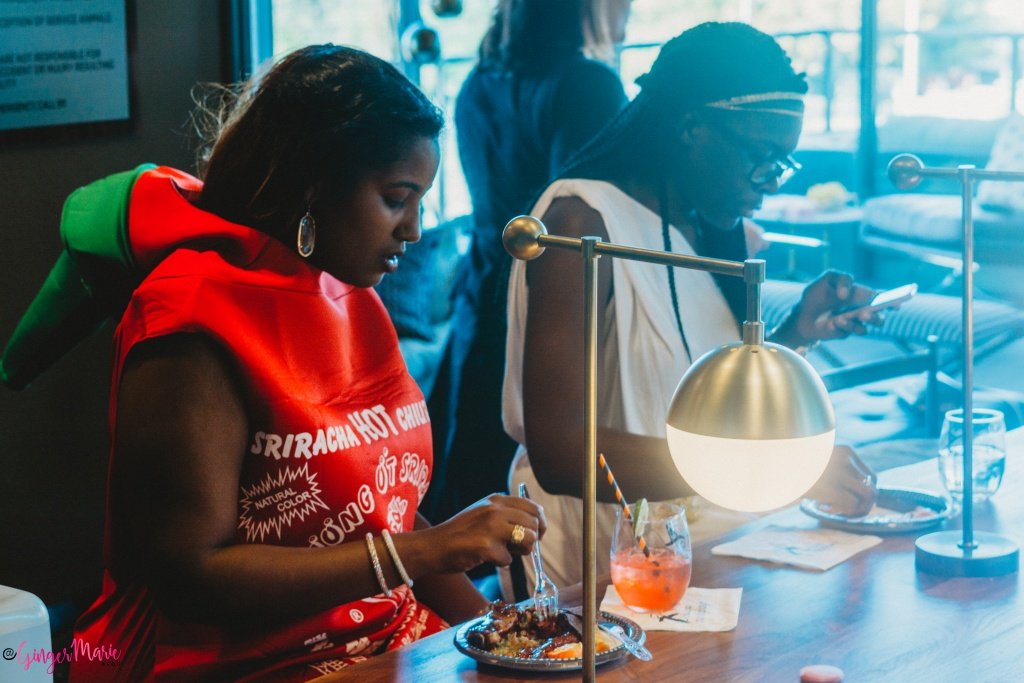 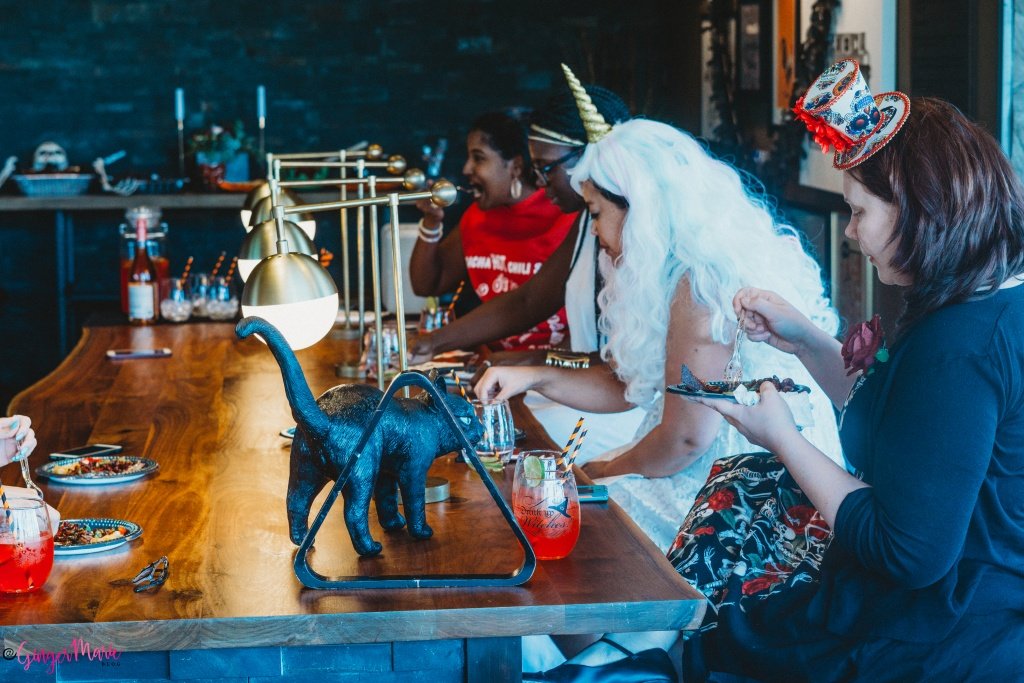 I love giving people something to take home. In addition to the wine glasses, DinDin Party provided some dope swag bags that included Kate Weiser Chocolate! There were skulls and fingers, each of which was terrifying and delicious. The perfect gift for guests from this adult Halloween party! 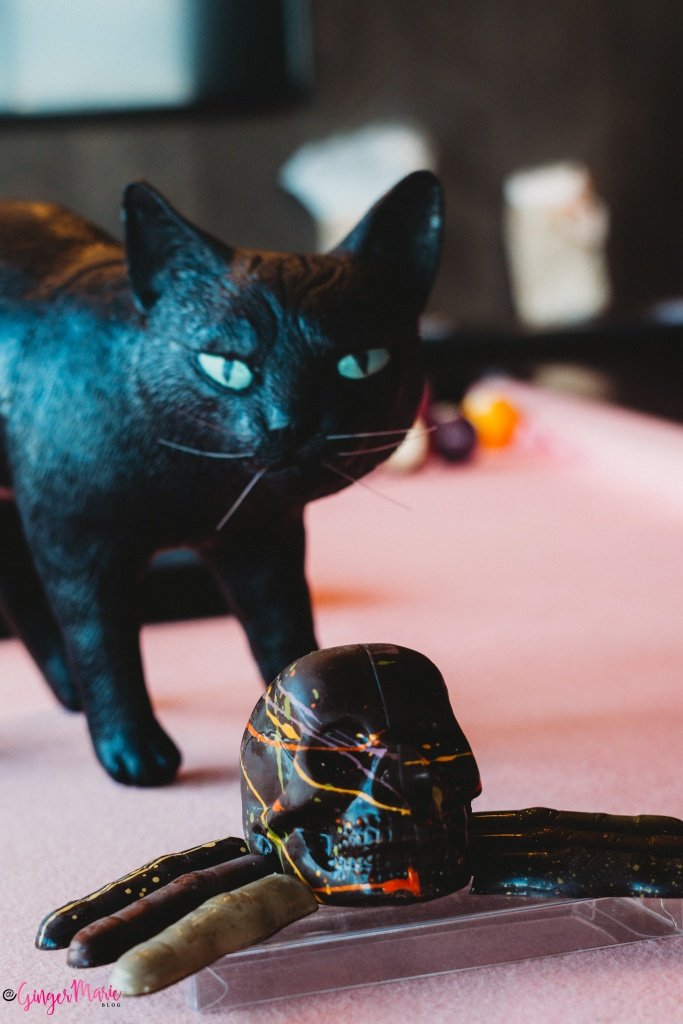 What is DinDin Party

The party was a ton of fun, but I never would have thought to host it if it hadn’t been for DinDin Party. The concept, which started here in DFW, allows you to host or attend a party in your city. As a host, you set everything up, do all the cooking, come up with a theme and sell tickets on their website. As an attendee, you just show up and enjoy the ride! 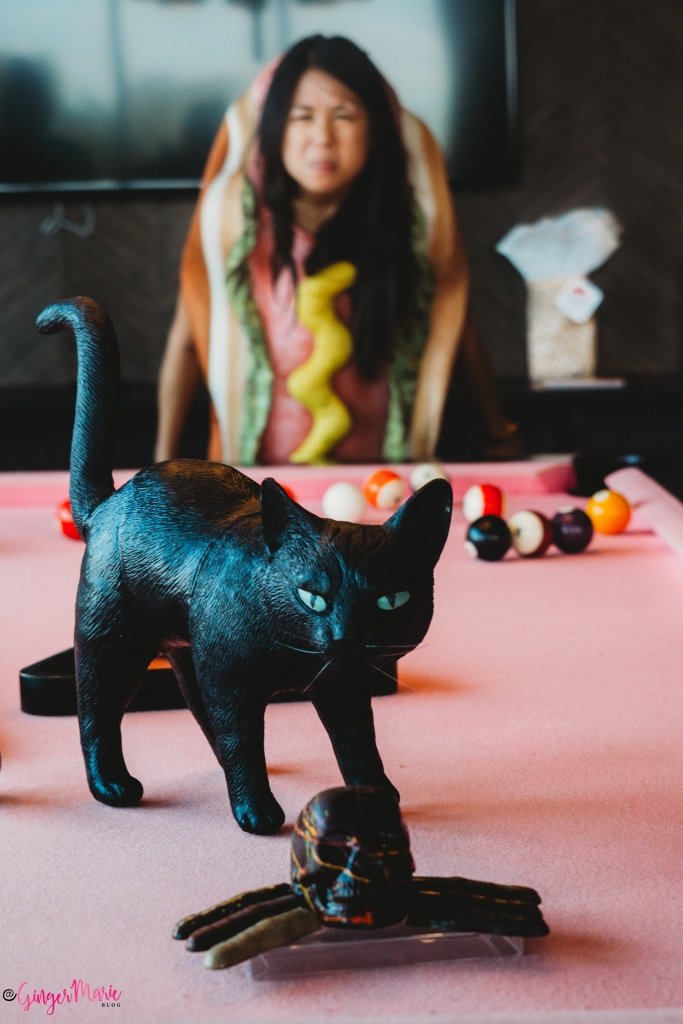 People have parties with all kinds of different themes. There are Havana Nights themes, and game night themes. Even a Thanksgiving Dinner theme that supports the We Are All Homeless project! People can come up with whatever they’d like, and if it sounds fun to you, you just buy a ticket and show up to the party!

I had so much fun hosting this DinDin Party. I can’t wait to do another one. If you were to host (or attend) a party, what would you want the theme to be? Let me know in the comments below! 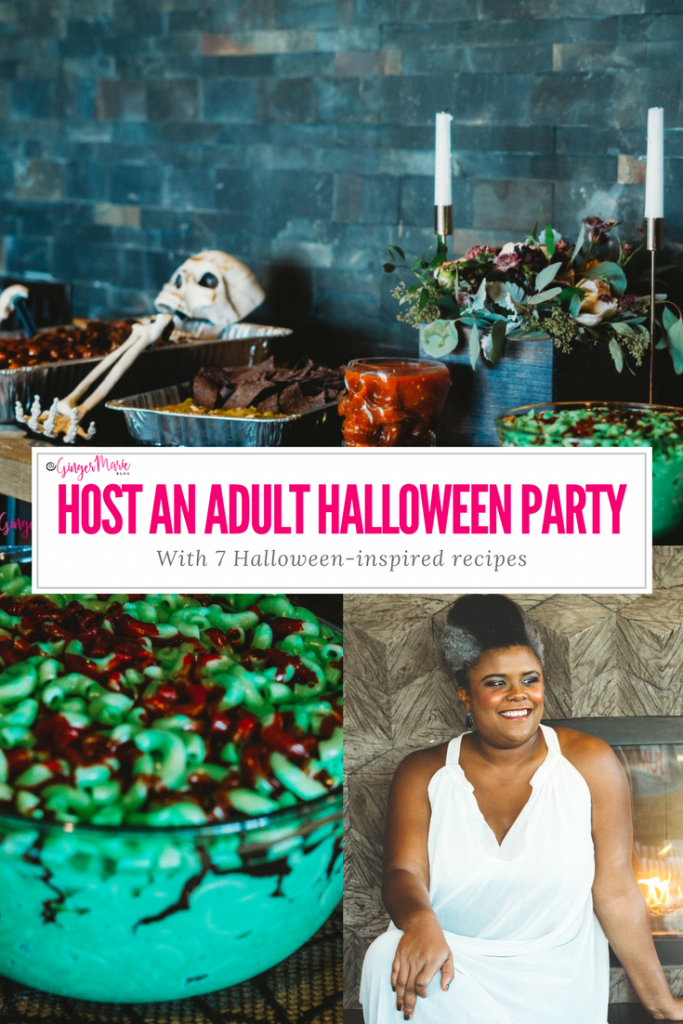 This post was sponsored by DinDin Party. All thoughts and opinions are my own. I never write about things I wouldn’t actually use myself, so rest-assured that they have my stamp of approval!