Longhorn Steakhouse is FINALLY in DFW and I’m obsessed

When I lived in North Carolina, I would go to Longhorn Steakhouse at least once per month. Their steaks are amazing, but their mac and cheese spoke to my heart. Well when they met with me and told me they were FINALLY coming to Dallas I pretty much lost my marbles. I raced out to the store, located in Plano off 75, when they said they would host me and ordered all of my old favorites, and a few newbies. Turns out the Texas locations have exclusive menu items – plus they get all of their steaks from Texas! Here’s what I ordered.

To start, we ordered some tasty cocktails! In full disclosure, I’m not typically a “sweet drink” person. I like my drinks as strong as my men. But, the waitress and manager both recommended Longhorn’s Texas-only cocktails so I went with their suggestions. 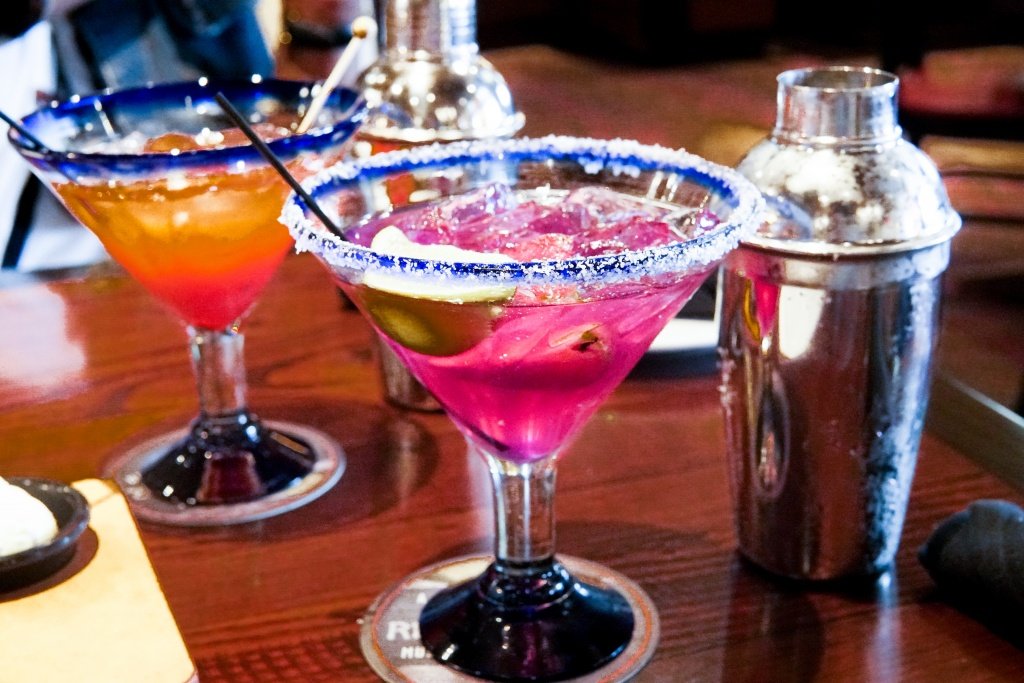 Front and center is their Desert Pear Margarita made with, you guessed it, prickly pears! I loved the pretty pink color! My friend, Bree, had the Strawberry Margarita which was served with a stick of candy! So yummy.

I’ll tell y’all right now, I am an app person. I tend to like appetizers more than I like entrees. Ask any of my friends and they will tell you that I am quick to order 2-3 apps and call that a meal. The one app I was most looking forward to on this visit was the Firecracker Chicken Wraps! I used to be obsessed with them when I lived in NC. But that’s not all we ordered. If I am driving to Plano for some food, you bet your bottom that I will be miserably full by the time I have to journey on my ride home.

In addition to the Firecracker Chicken Wraps, we had White Cheddar Stuffed Mushrooms and Texas Brisket Queso. Y’all. It was all good, but those cheddar stuffed mushrooms stole the show. Bree and I had to split that 5th one because they were that good!

The only thing I was usre of going into the entrees was that ya girl wanted some mac and cheese. I used to go to Longhorn back home just to get some of their mac! You know its good when they bake it in a cast iron dish! Hot dang!! Plus they use the sharpest white cheddar a girl could wish for. It.Is.EVERYTHING But I digress. 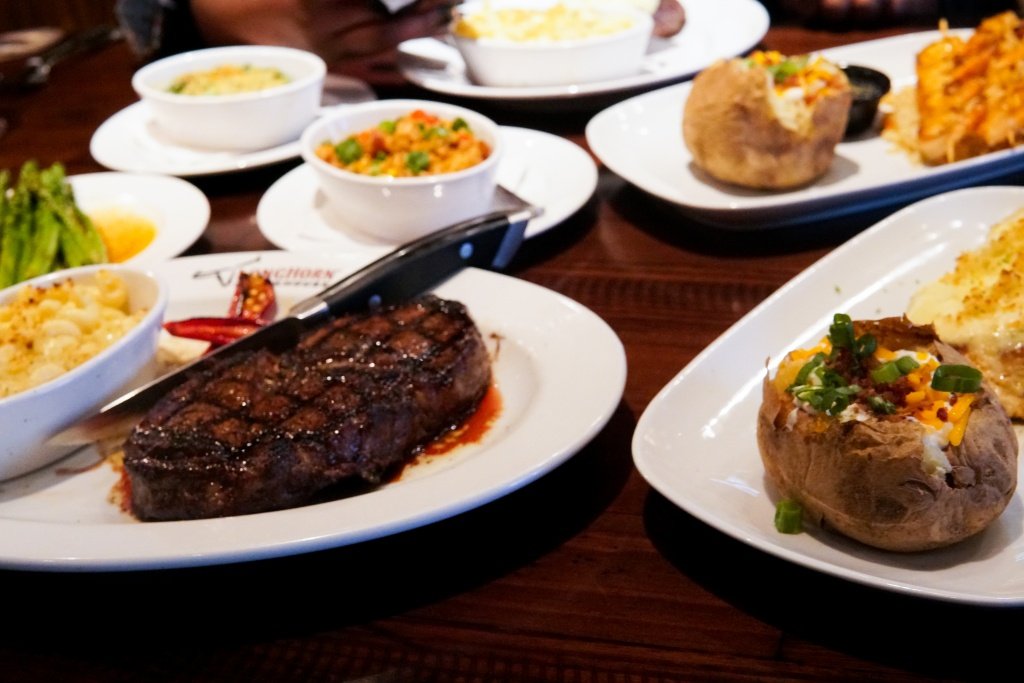 For sides, we had the fresh steamed asparagus, parmesan creamed spinach, and seasoned rice pilaf. I’m pretty picky about my asparagus (because most places overcook them) but I was impressed when I found that it still had a crunch! The spinach was good too and reminded me of spinach dip (i.e. I was looking around the table for some chips). The one thing I was not impressed with was the rice pilaf. It wasn’t quite what I’d hoped for.

Our entrees were to die for. I got the USDA Prime Delmonico (which came HIGHLY recommended by everyone that stopped at our table). It was everything I needed it to be. So tender, well seasoned, and big AF. I ALWAYS eat my steak with steak sauce – I even asked them to bring A1 to the table before even tasting my food – but I didn’t need it on this bad boy.

Bree ordered the Redrock Grilled Shrimp and said it was really good too! The one thing I didn’t get a picture of ( because i was too busy scarfing it down) was the Parmesan Crusted Chicken. As fantastic as the steak was, I will be coming back to Longhorm for this chicken alone. My mouth is watering as I type this so you’ll probably see it on my Instagram stories this week. 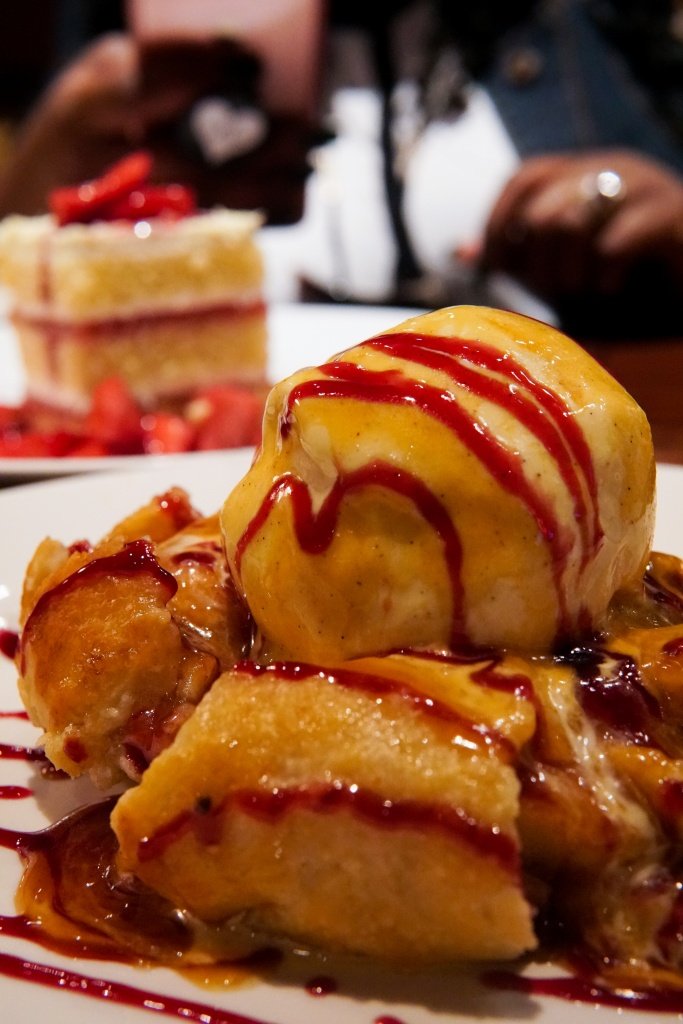 I couldn’t leave Longhorn without diving into some of their Caramel Apple Goldrush. It’s like apple pie but better. They top it with vanilla bean ice cream, caramel, and raspberry sauce. Even though I was full AF, I had to have at least a bite before I hit the road. 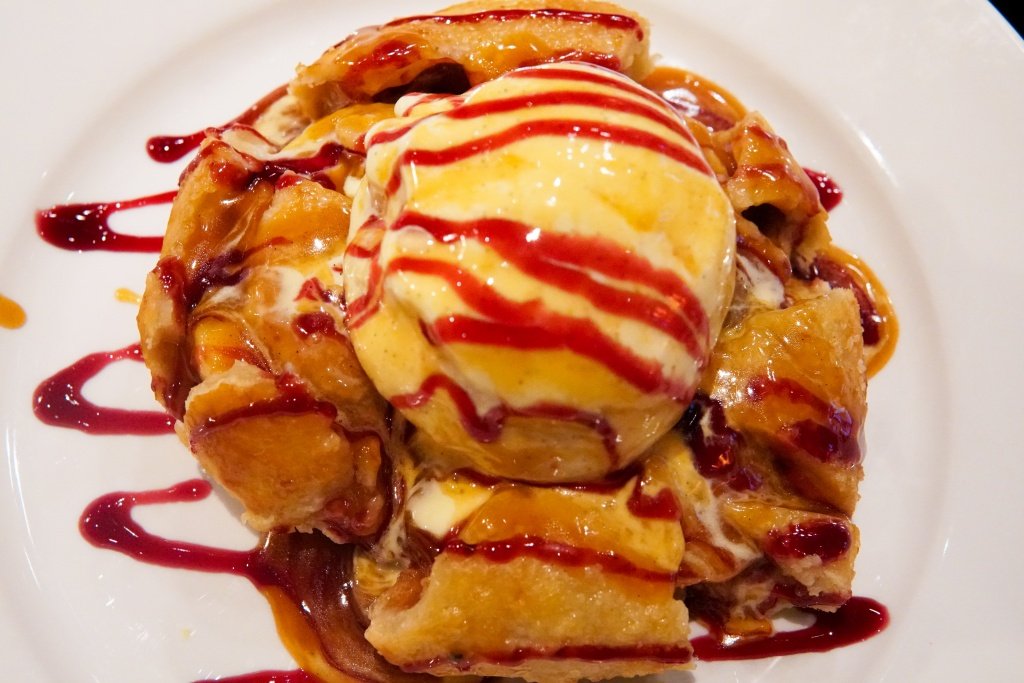 Bree had a slice of cake that I can’t remember the name of. Honestly, despite it looking delicoius, I didn’t try it. I was too engulfed with my delicious gold rush.